Half Earth is half hearted:
​Make way for half universe
(First published in Current Conservation 12.4; illustrations by Amit Kaikini) 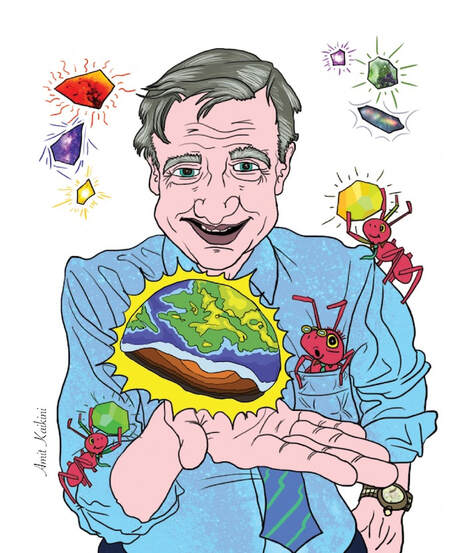 But is this the first time this idea has been circulated? A few years ago, EO Wilson, one of the most prominent biologists of the 20th century, and an evangelist for conservation, came up with the idea of Half-Earth: the notion that half of earth was to be set aside for nature. This is based on the principle that humans are not part of nature, and that for the Earth to be able to preserve its biodiversity and sustain itself, humans had to be removed from one entire half of it.

Despite the similarity of these ideas, we don’t think that the Marvel script writers are half-earthers, or that Wilson is a secret Avengers fan (unless of course of Antman). The filmmakers and conservationists are no doubt independent, original thinkers. No one has copied anyone else.
But our views are not so important here. We understand that an irate Half-Earther has been pressing the Half-Earth movement to sue Marvel comics for plagiarism. This is, of course, absurd. First, there is no plagiarism. Second, never pick a fight with Thanos. So we would like the Half-Earth movement to distance itself from such foolishness, and release the following statement:

We hope that this press release will erase all possibility of confusion and allow the rest of us to get on with the business that matters – halving all known cases of megademophobia.

​For a sensible rendition of these arguments see:https://mashable.com/2018/05/03/thanos-half-universe/?europe=true#4b8V7KTSauqg
Powered by